Kurara has never known any other life than being a servant on board the Midori, but when her party trick of making paper come to life turns out to be a power treasured across the empire, she joins a skyship and its motley crew to become a Crafter. Taught by the gruff but wise Himura, Kurara learns to hunt shikigami – wild paper spirits who are sought after by the Princess. But are these creatures just powerful slaves, or are they beings with their own souls? And can a teenage girl be the one to help them find their voice – and change the course of an empire?

I have read more YA books than usual recently, and I have been appreciating the way in which they can often be more honest than adult fiction, and that when they deal with the realities of the world - with or without using fantastical elements - it feels more sincere. Obviously I do not think… END_OF_DOCUMENT_TOKEN_TO_BE_REPLACED

For generations, deadly storms have ravaged Mina's homeland. Her people believe the Sea God, once their protector, now curses them with death and despair. To appease him, each year a maiden is thrown into the sea, in the hopes that one day the 'true bride' will be chosen and end the suffering. Many believe Shim Cheong - Mina's brother's beloved - to be the legendary true bride. But on the night Cheong is sacrificed, Mina's brother follows her, even knowing that to interfere is a death sentence. To save her brother, Mina throws herself into the water in Cheong's stead. Swept away to the Spirit Realm, a magical city of lesser gods and mythical beasts, Mina finds the Sea God, trapped in an enchanted sleep. With the help of a mysterious young man and a motley crew of demons, gods and spirits, Mina sets out to wake him and bring an end to the storms once and for all. But she doesn't have much time: a human cannot live long in the land of the spirits. And there are those who would do anything to keep the Sea God from waking...

Eighteen-year-old Daunis' mixed heritage has always made her feel like an outsider, both in her hometown and on the nearby Ojibwe reservation. When she witnesses a shocking murder, she reluctantly agrees to be part of a covert FBI operation into a series of drug-related deaths. But the deceptions - and deaths - keep piling up and soon the threat strikes too close to home. Now Daunis must decide what it means to be a strong Anishinaabe kwe (Ojibwe woman) and how far she'll go to protect her community, even if it tears apart the only world she's ever known.

Three years ago, young Lord Cassia disappeared in the midst of war. Since then, a devastating illness has swept the land, leaving countless dead and a kingdom forever altered. Having survived war and plague, Cas, now eighteen, wants only to return to his home in the mountains and forget past horrors. But home is not what he remembers. His castle has become a refuge for the royal court. And they have brought their enemies with them. An assassin targets those closest to the queen, drawing Cas into a search for a killer. With the help of a historian-in-training named Lena, he soon realizes that who is behind the attacks is far less important than why. Cas and Lena must look to the past, following the trail of a terrible secret—one that could threaten the kingdom’s newfound peace and plunge it back into war.

In an empire on the brink of war... Ahn is no one, with no past and no family. Altan is a lost heir, his future stolen away as a child. When they meet, Altan sees in Ahn a path to reclaiming the throne. Ahn sees a way to finally unlock her past and understand her lethal magical abilities. But they may have to pay a far deadlier price than either could have imagined.

The boys of Huaxia dream of pairing up with girls to pilot Chrysalises, giant transforming robots that can battle the mecha aliens that lurk beyond the Great Wall. It doesn’t matter that the girls often die from the mental strain. When 18-year-old Zetian offers herself up as a concubine-pilot, it’s to assassinate the ace male pilot responsible for her sister’s death. But she gets her vengeance in a way nobody expected—she kills him through the psychic link between pilots and emerges from the cockpit unscathed. She is labeled an Iron Widow, a much-feared and much-silenced kind of female pilot who can sacrifice boys to power up Chrysalises instead. To tame her unnerving yet invaluable mental strength, she is paired up with Li Shimin, the strongest and most controversial male pilot in Huaxia​. But now that Zetian has had a taste of power, she will not cower so easily. She will miss no opportunity to leverage their combined might and infamy to survive attempt after attempt on her life, until she can figure out exactly why the pilot system works in its misogynist way—and stop more girls from being sacrificed.

Vanja Schmidt knows that no gift is freely given, not even a mother's love. The adopted goddaughter of Death and Fortune, Vanja has long made her own way in the world as the dutiful servant of Princess Gisele. Until a year ago, when her otherworldly mothers demanded payment for their care, and Vanja decided to steal her future back . . . by stealing Gisele's life. With the help of an enchanted string of pearls, Vanja transformed into her former mistress and took her place, leaving the real Gisele a penniless nobody. Now, Vanja leads a lonely but lucrative double life as princess and jewel thief, charming the nobility while emptying their coffers to fund her great escape. Until, one heist away from freedom, Vanja crosses the wrong god and is cursed to turn into jewels, stone by stone. With a feral guardian half-god, Gisele's sinister fiancé, and an overeager junior detective on her tail, Vanja has just two weeks to pull off her biggest grift yet, or she risks losing more than her freedom - she could lose her life.

For the first time, an Empress Redemptor sits on Aritsar's throne. To appease the sinister spirits of the dead, Tarisai must now anoint a council of her own, coming into her full power as a Raybearer. She must then descend into the Underworld, a sacrifice to end all future atrocities. Tarisai is determined to survive. Or at least, that's what she tells her increasingly distant circle of friends.

Derry and her eight siblings live in an isolated house by the lake, separated from the rest of the world by an eerie and menacing forest. Frank, the man who raised them after their families abandoned them, says it’s for their own good. After all, the world isn’t safe for people with magic. And Derry feels safe—most of the time. Until the night her eldest sister disappears. Jane and Derry swore to each other that they’d never go into the forest, not after their last trip ended in blood, but Derry is sure she saw Jane walk into the trees. When another sibling goes missing and Frank’s true colors start to show, feeling safe is no longer an option. Derry will risk anything to protect the family she has left. Even if that means returning to the forest that has started calling to Derry in her missing siblings’ voices. As Derry spends more time amidst the trees, her magic grows more powerful . . . and so does the darkness inside her, the viciousness she wants to pretend doesn’t exist. But saving her siblings from the forest and from Frank might mean embracing the darkness. And that just might be the most dangerous thing of all. 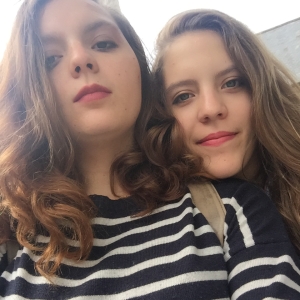 We are two sisters who enjoy reading and want to spread the love with everyone we can. Gemma is a big fan of contemporary fiction, the classics, romance, drama, and fantasy, and she is currently studying Classics at university. Ariana’s preference is for SFF, middle grade books, history and nature writing, and she holds a degree in English Literature and Italian, and works as a bookseller for Waterstones.