THE GAME IS ON.
TRAVEL WITH WONDER.

When Arthur, Ren and Cecily investigate a mysterious explosion, they find themselves trapped in the year 2473. Lost in the Wonderscape, an epic in-reality adventure game, they must call on the help of some unlikely historical heroes to play their way home before time runs out. 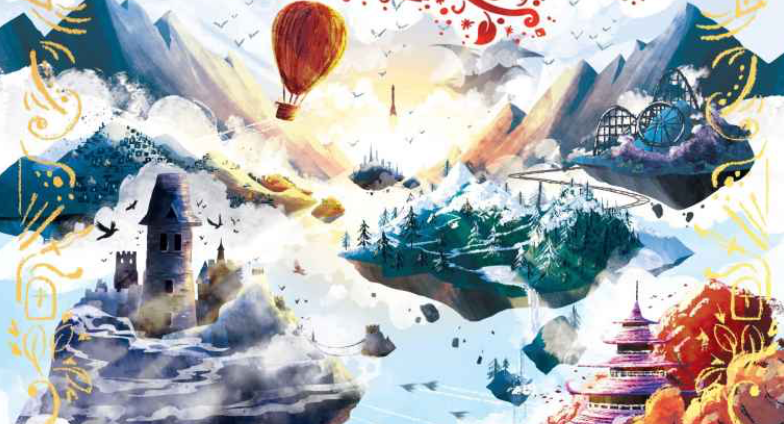 Our first middle-grade book review! Over the past year I have started reading children’s books again, as well as my usual genres. There are so many books coming out for pre-teens after series like Harry Potter, Percy Jackson, Alex Rider, Artemis Fowl, and Skulduggery Pleasant pushed the boundaries in new and exciting ways. You may have noticed that all of the series I just mentioned are written by men, except Harry Potter, and that all of them, including Harry Potter, have very male-centric narratives. All the main characters are boys, and all of these series can be marketed to boys and girls. The good news is that there is a lot of middle-grade fiction written by women, and a lot of them have female heroines who go on magical adventures (for the sake of this blog, I am referring to books with magic and adventure elements, because that is primarily what I read, but there is also a lot of brilliant middle-grade fiction set in the real world that tackle real world issues). Those are still predominantly read by girls but I am hopeful that things will slowly start to even out.

Having said that, Wonderscape actually has a male narrator –Arthur– but he is accompanied by two girls and throughout the whole story there is never a feeling of otherness, superiority, or inappropriate attraction coming from Arthur. He starts the book being intimidated by his companions because Cecily is one of the most popular girls in school and Ren is the new girl with a reputation for being a rebel and a loner, and ends the story having acquired two new friends that he wouldn’t have otherwise made. This, as I mentioned in my last blog, is one of my favourite tropes. Found family and developing friendships are such a joy to read. There is also a lot of diversity in the book: Cecily is of African descent and Ren is of Japanese descent and she uses that part of her culture throughout the story. She also has two mothers, and part of the reason she has a reputation for being a rebel and a loner is because of the things others say about her parents. All of this is peppered into the narrative in a really natural way, and just as Arthur never changes the way he thinks about the girls because of their gender, he also doesn’t change the way he thinks because of their backgrounds, and the reader is never encouraged to either.

‘It was early morning and Arthur was already running late for school when the gnomes exploded.’

This is the first line of the book, and it only gets better from there. As Arthur is walking to school, a great power surge from within an empty house on his block knocks him down as he passes by. The explosion is also heard by Cecily, who is staying with her aunt nearby, and Ren who also lives in the area. After alerting the police they hear the sound of a dog inside the house, and decide to go and rescue it before anything else happens, and as they follow the sound of the dog’s whimpers they come to a door with strange markings and a sort of power pulsing from it. Though they prop the door open after they pass through it and find the dog, it closes and disappears, and they suddenly find they they are no longer in a house but in a cabin of a wooden ship, surrounded by ocean. As they try to work out what has happened to them, a scroll with a riddle appears; to get out of the seemingly door-less cabin they must solve it, and complete the challenge waiting for them on deck. Once they do this, they meet an unexpected historical figure, and discover that they are 400 years in the future. They also discover that if they don’t return to their own time and place within fifty-three hours their bodies would break down into protoplasm to correct the imbalance in the universe. From there starts a mad race to find the one person in Wonderscape that can help them return home, but with each realm of the game they visit they must complete its challenge in order to move on to the next one. Will they make it in time? And what other secrets does Wonderscape hide?

I’ll keep this blog post short, especially since my last one was quite lengthy. As I said at the start, the narration and characters are very refreshing, and all three of them are so likeable. The challenges they face are also really exciting, and it’s fun to try and figure out the solution to them before the characters do. There’s also an element of education, as each challenge they go through is linked to a famous historical figure, and some of them are lesser known, like Wangari Maathai and Tomoe Gozen, and I’m sure readers will be inspired to do their own research into these amazing characters. There was definitely a lot of detail that went into this book, and Jennifer Bell wrote it exquisitely. Anyone from around nine-years-old and up will truly enjoy it.

Storyteller, bookseller and reviewer. Enjoy my thoughts and short stories. View all posts by azucchi